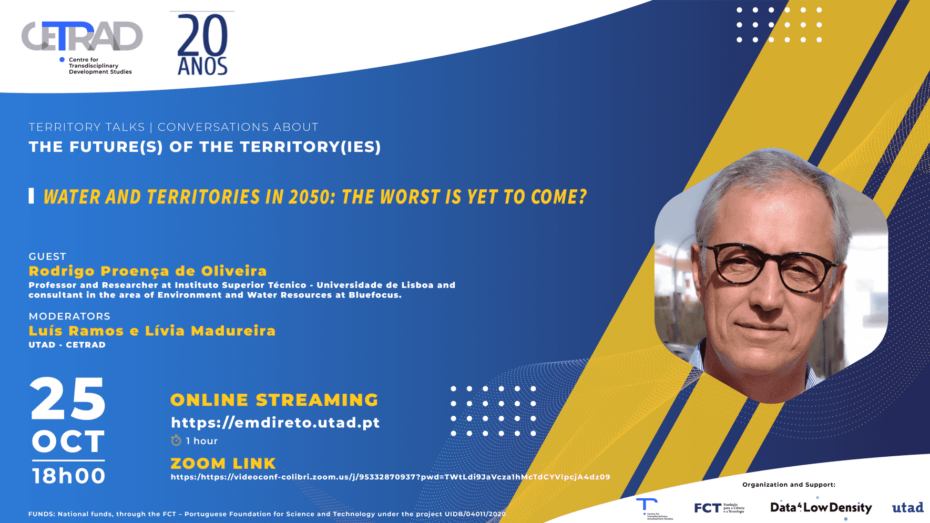 October 25 is the date set for the 4th session of the cycle Territory Talks, Conversations about the Future(s) of the Territory(ies). The session, dedicated to the theme “Water and Territories in 2050: The worst is yet to come?”, will feature Rodrigo Proença de Oliveira from Instituto Superior Técnico – University of Lisbon, who will lead a reflection on the impact and consequences of water scarcity.

Organised in the framework of CETRAD’s 20th anniversary, the “Territory Talks” are a contribution to imagining and (re)thinking about the place territories can and should occupy in the construction of a prospective, desirable and possible scenario for Portugal, in the light of the major societal, environmental and technological challenges of the 21st century : the demographic transition/crisis; the climate crisis, the efficient use of resources and the safeguarding of natural ecosystems, agriculture and the transition of the global food system, the reconfiguration of the globalisation model and re-industrialisation, the digital transformation of society and the new models for work and the mobility of individuals and companies, the crisis of democracy and how to encourage citizen action.

The situation of meteorological drought and water shortage, largely caused by climate change, is already a serious and serious problem faced by several countries and regions of the planet. In Portugal, the propensity to droughts and water shortage is also beginning to be felt and, everything indicates that it will increase exponentially until 2050. What will be the effects and consequences in the different national territorial spaces, in land use and occupation patterns, in settlement models or in agricultural production systems? Which territories will be most affected? Will there be a shortage of water for public supply in the interior and south of the country? How will the shared management of transboundary Iberian rivers be affected? Will watercourses become increasingly intermittent? Will farmers no longer have enough (and cheap) water for intensive crops? Will the risks of pollution and contamination of waterways increase? Are the survival of many ecosystems and the preservation of biodiversity threatened by lack of water?

Rodrigo Proença de Oliveira. Civil Engineer from Instituto Superior Técnico and PhD in Civil and Environmental Engineering from Cornell University, USA. He is professor and researcher at Instituto Superior Técnico – Universidade de Lisboa and consultant in the area of Environment and Water Resources at Bluefocus. For over 35 years he has been working in the field of hydrology and water resources management, having participated in a large number of projects in these fields, namely in Portugal, Brazil, Cape Verde and Mozambique. He dedicates a very special interest on the challenges posed by climate change, having been co-author of the chapter on water resources in the first projects on the impacts of climate change in Portugal developed in the early 2000s (SIAM projects). Currently, he is a member of the Scientific Panel of the National Strategy for Adaptation to Climate Change. He is also secretary of the Conselho da Região Hidrográfica do Tejo e do Oeste. He was the coordinator of the project Assessment of current and future water availability and application of the scarcity index WEI+, carried out for the Portuguese Environment Agency by the companies Nemus, Bluefocus and Hidromod.